skip to main | skip to sidebar

THE RECYCLE OF LIFE!

The first big sneak peek "The Recycle Of Life"  35" X 11" graphite on art board.  In the future of the Robot Industrial Revolution you will assemble your replacement.

I have enjoyed working with graphites and charcoals lately, getting down to the basic light and shadows.  The most important discovery is how different types of board and paper with take graphite and charcoal.   There were a couple false starts on this because the graphite would not get dark enough.  If you are in Telluride Aug 30 through Oct 1st check it out!
Posted by Dave Pressler at 3:11 PM No comments:

THE FUTURE OF THE ROBOT INDUSTRIAL REVOLUTION! 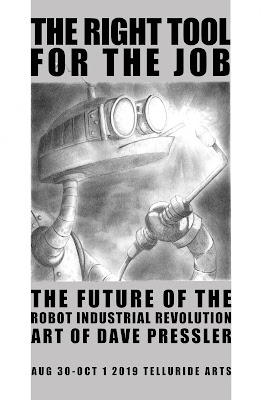 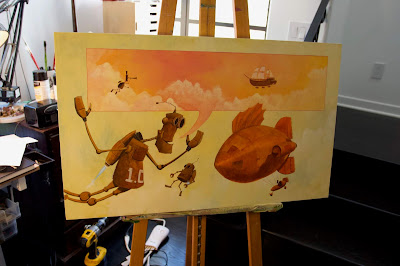 Telluride Co Aug 30 at the Telluride Arts Gallery "The Right Tool For The Job"  Art about the future of the Robot Industrial Revolution.  Right now we are going through another industrial revolution, this time the robots will take all of our jobs and I predict in the future be just as unhappy and disgruntled as us humans.   The show will consist mostly of graphite pieces and one painting; "Talking About The Old Days." 33"X 20" Acrylic on MDF.


Posted by Dave Pressler at 1:10 PM No comments:

Ringing in the new year has always been a pensive time for me.  On the one hand a new year full of possibilities is rolled out in front of us.  On the other hand the anxiety of where will my next gig come from?  That is the new year tension that most freelancers can face, this was much more of a problem when I was starting out not so much now that I have been more established.

Making things happen is always the answer to these types of problems.  Immediately contacting potential clients about projects, and creating art for gallery exhibitions, being proactive is the solution.

This year I have a few things going on, I'm out pitching shows again.  I am working on the sequel to Back To School With Bigfoot, as well as prepping some gallery shows.  I will be doing an art exhibition in Telluride Colorado this August, In February I have the Plus One Show at Art Share LA, and will be participating in a group show at Space Gallery.

There are several personal book projects I am chipping away on, as well as little R&D art pieces I am working on as experiments or proof of concept.   One of the best gifts I received is the new Ralph McQuarrie Star Wars compilation art book from my step daughter.   Ralph was the first production designer I became aware of.  I was huge fan of Star Wars at 12 when it first came out and bought all the fan magazines that showed making of pics and articles.  Even then I was way more into how it was made then consuming the mythology of Star Wars.  Those Sci-Fi movie magazines "Starlog" "Fantastic Films" were my first glimpse into production design, creature sculpting, special effects.  At the time I didn't know that artist were a big part of making movies.  Looking at the early Ralph McQuarrie sketches and seeing how the work evolved into a finished character or environment turned the light on in my head about art & making movies.

Even now I find inspiration in those old drawings and paintings.  There's always some new inspiration out there!   Even if it's old.

Happy New Creative Year!
DP
Posted by Dave Pressler at 9:34 AM No comments:

If you missed my Idea To Object Museum Exhibition this book is the next best thing!  A Beautiful hardcover volume with hundreds of photos covering the 21+ years of my work.  It is available at my website store.  Just in time to give as a gift for the naughty and nice people on your list! 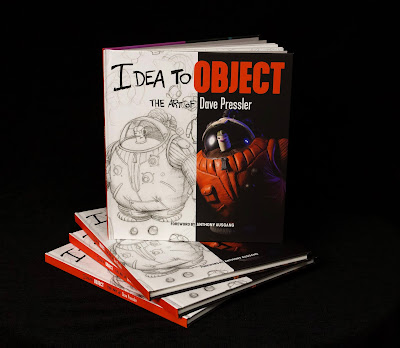 Posted by Dave Pressler at 11:17 AM No comments:

WHAT HAPPENED TO SUMMER?!?!

Wow, in about 3 weeks the first day of fall will be here!  Where did Summer go?  This year I focused on the preparations for my show; Idea To Object for the Museum Of Art And History in Lancaster CA it is part of the larger Robot Show.  This was an amazing opportunity to have a retrospective of art from the last 20+ years all on display in one room. 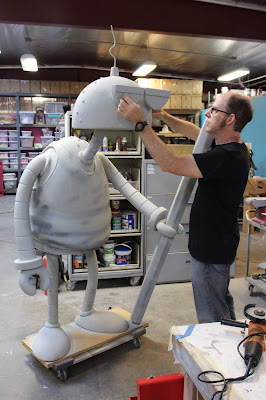 Preparing all of the large scale sculptures was what took the most time. 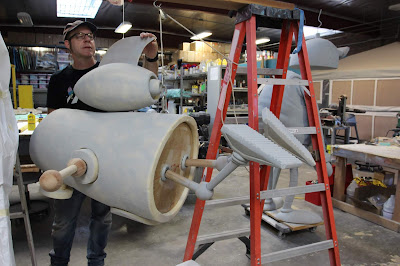 Fear of Failure Robot had to be hanging most of the time.  Even when resin coated the foam is a bit fragile

Film Maker Patrick Nissim made an excellent documentary short about my work and philosophy about being a working artist.  Also thanks to many of my art colleagues who were willing to give their time and contribute to the film.  You can watch it here.

Next stop Designer Con in November we will be doing a mini Idea to Object display there.

Very Exciting news; This August 4th is the opening of The Robot Show at the Museum Of Art & History in Lancaster California.   My solo exhibition in the main gallery is titled; “Idea To Object” it is a retrospective of my art works from the last 25 years.  The Show runs from August 4th to September 30th 2018.  My narrative of the show is to demystify the creative process, show a glimpse behind the curtain How did that drawing / painting / sculpture / animation come to be created?  As someone whose worked in all these mediums, I've had to figure that out a lot throughout my life. And that's the central question of my upcoming retrospective at MOAH: How does an idea become an object? 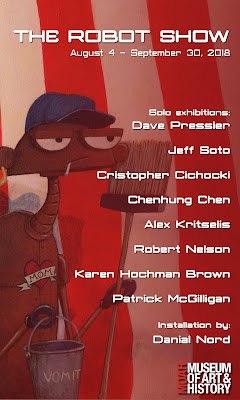 In addition to the art their will be a book and a documentary. Also I am recreating my home studio in the museum for the duration of the show It’s quite an amazing opportunity and an honor.  There are also many other talented robot artists in the other gallery rooms.
The opening reception will be Saturday August 4th from 2 to 6 PM Hope you can make it!!!

Posted by Dave Pressler at 12:42 PM No comments:

SHUT UP AND DRAW FIGURE! 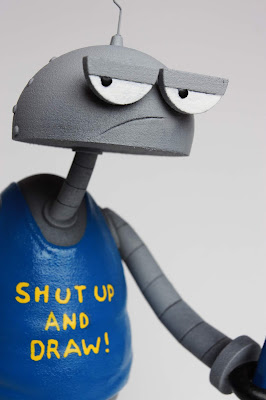 My Idea To Object show is coming up in August, as part of the show I will be offering a 8 inch tall printed "Shut Up And Draw!" robot figure, Hand painted by myself and limited edition.  Also with it's own custom Staedler Pencil. 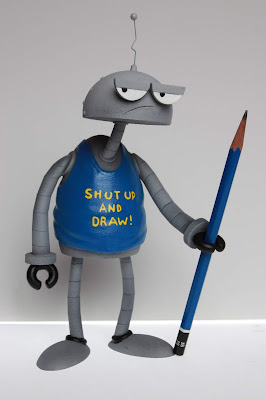 The figure is digitally sculpted by Phil Ramirez and produced by Pretty In Plastic. 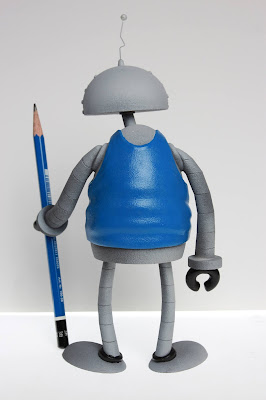 Information on ordering this figure will be coming soon!  Also I am sculpting several large robots for the show, as well as a life size Shut Up And Draw! Robot. 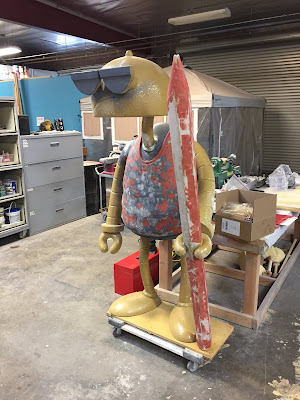 There is still more finishing work to be done.   Looking forward to seeing everyone at the show!

Dave Pressler
I am a professional sculptor, Illustrator, and character designer. I work in animation and the world of pop art.